There has been an increase in awareness of declining bat populations across the U.S. Many of California’s agencies are increasing and standardizing their requirements for protecting bats and their 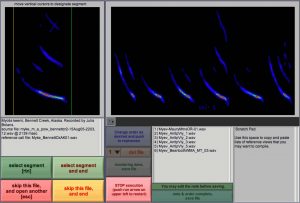 roosts. Gallaway Enterprises has been closely following these changes and responding by implementing scientifically appropriate and creative solutions for bat avoidance, exclusion, and mitigation techniques. Gallaway Enterprises is using the latest version of SonoBat acoustic bat detection software to aid in the process of identifying which bat species are present at many of our project sites. SonoBat software can determine species by analyzing calls that have been recorded by our biologists.

Gallaway Enterprises bat specialists stayed busy in 2018 with several bridge replacement and retrofit projects that had large bat maternity colonies roosting within the bridges. Two particularly challenging projects this year were the East Hill Road over Davis Creek Bridge Replacement project in Mendocino County and the Mockingbird Road over Robinson Creek Bridge Replacement project in Lake County. Structure- or bridge-roosting bats were not identified as a species with potential to occur on either project, but were discovered incidentally by Gallaway Enterprises during pre-construction surveys. 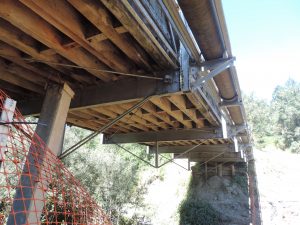 One bridge was home to a large maternity colony and the other was a bat bachelor roost. Working closely with the contractors, local agencies, and the California Department of Fish and Wildlife (CDFW), Gallaway Enterprises developed avoidance and minimization measures and a plan for temporary and permanent roost mitigation. For these projects, time was of the essence. Gallaway Enterprises worked quickly to develop the mitigation measures and start consultation with CDFW to ensure minimal construction delays. Measures developed were project-specific and included construction of noise attenuation devices, acoustic and visual monitoring during pile driving, visual disturbance buffers, and the installation of bat exclusion devices to safely and humanely evict bats outside of the maternity season. Gallaway Enterprises bats specialists conducted compliance monitoring and installed exclusion devices at the bridges during the appropriate exclusion windows.

Lastly, Gallaway Enterprises worked with stakeholders to design and construct bat roosting habitat that mimics the pre-project roost temperatures in order to attract a wide arrange of bat species to mitigate the loss of roosting habitat. Boxes were a mix of wooden and concrete design and were strategically mounted to the new bridge structures, as well as, poles around the sites.

Construction activities are in full swing on Phase 1 of the Caltrans Interstate 80 and State Route 65 Interchange Project (Project). The Project is located within Placer County in the cities of Roseville and Rocklin, near the Roseville Galleria. Flatiron Construction is the primary contractor responsible for widening the northbound viaduct of State Route 65, as well as the Galleria Boulevard/Stanford Ranch Road ramps. The scale of this Project is impressive with 13-foot wide and 100-foot deep holes being drilled for the viaduct column footings. In order to construct the columns, Flatiron Construction is temporarily diverting Antelope Creek that flows under the viaduct.

Harbin Hot Springs Resort, once home to nearly 300 residents and employees, has been closed since the Valley Fire evacuation orders in September 2015.  The resort community, just minutes outside of Middletown, found itself in the path of the fire and suffered major losses as the majority of the structures present onsite were destroyed.

Gallaway Enterprises worked fast to create a frog relocation plan and obtain an emergency Incidental Take Permit in order to get the project underway as soon as possible. The delayed construction led to long hours and weekends building the new bridge, and Gallaway Enterprises biologists were onsite daily to relocate frogs, monitor for environmental compliance, and conduct water quality testing within Harbin Creek. The completed Harbin Springs Road Bridge will contribute to the economic recovery of the area as Harbin Hot Springs Resort continues to rebuild its facilities. In January 2016, Gallaway Enterprises went back out to the bridge to see if there were any signs of the bats using the new roosting habitat. High fives were exchanged after urine stains were observed under every bat box that was installed on the bridge! Bats urine is highly acidic and leaves noticeable white stains on bridge structures in the areas that they roost. Piles of bat guano (i.e. bat poop) were also observed under accessible bat boxes and bats could be heard conducting social chirps within the bat boxes. The detection of the bats roosting in the bat boxes in January was also a surprising discovery! It was well known by Gallaway Enterprises that Ord Ferry Bridge served as a maternity roost where local bats produced and raised young, now with the new bat boxes, the bridge also serves as a winter roost for bats! Bats in the area typically leave their maternity roost after the breeding season and migrate locally to winter roosting areas. Thanks to the new bat habitat installed on the Ord Ferry Bridge, local bat populations and sensitive bat species can find suitable roosting habitat year around.

Gallaway Enterprises recently completed a wide range of environmental compliance services for the Yuba County Public Works Department on the Spring Valley Road Bridge over Browns Valley Ditch. The purpose of the project was to replace a functionally obsolete bridge structure with a new bridge.  Tasks included:

This project goes to construction in 2015! Gallaway Enterprises recently finished biological monitoring on the on Caltrans State Route 24 Storm Damage Repair Project in Contra Costa County, just west of the City of Orinda. The purpose of the project was to repair storm water damage at two locations along the highway. The project involved the repair of a sinkhole around a riser and drainage inlet and storm damage repair of 0.53 acre saturated portion of the hillside to prevent it from slipping into the highway. Gallaway Enterprises provided onsite daily monitoring for 52 days to fulfill all the terms and conditions of the U.S. Fish and Wildlife Service Biological Opinion, California Department of Fish and Wildlife Incidental Take Permit, and Caltrans Specifications. Target species for the project included California red-legged frogs, Alameda whipsnakes, and nesting migratory birds. END_OF_DOCUMENT_TOKEN_TO_BE_REPLACED

Butte County suffered devastating damage in the summer of 2008 from wildfires that ripped through several communities. After the wildfires the County applied for, and was awarded, Community Development Block Grant (CDBG) Disaster Recovery Initiative (DRI) funds to assist with rehabilitation from the wildfires. The County was awarded over $7.3 million to address the recovery efforts, part of which were allocated to the rehabilitation of Concow Road and associated drainage infrastructure. END_OF_DOCUMENT_TOKEN_TO_BE_REPLACED

Gallaway continues to lead through innovation and science. The Butte County Department of Public Works recently engaged Gallaway Enterprises to assist them with a “bat problem”.   The Honey Run Covered Bridge is a historical bridge located on Honey Run Road over Butte Creek. The site is used for educational events, weddings, photo shoots, fundraisers and other public events. Over the years a large populations of bats have been using this historical structure as a maternity roost and the population of bats has grown. The concentration of bats creates a regular maintenance problem for the County.  END_OF_DOCUMENT_TOKEN_TO_BE_REPLACED